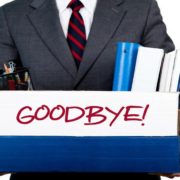 In December 2016, I had a conversation with a VP of Marketing of a $3.7B software company in the Kansas City metro as well as a referral lead for a Sales Director in California by an existing client of mine.

We had solid conversations, both prospects had pain and need and I could see a potential fit.

The next action item step was to continue our conversations in January 2017.

Both of my follow-up calls were this past week and neither person showed. Not unusual, things and life come up.

I left a message with both prospects and sent a follow-up email.

Immediately, I received an auto responder back from the VP of Marketing that she was no longer there.

Later in the evening, I received an email from the company of the Sales Director informing me that my contact was no longer with the company, etc.

I know I’m stating the obvious but people quit, retire, get terminated or change positions.

This is another reason we as sales professionals and small business owners should keep our pipeline full.

Heraclitus, a Greek philosopher, made this famous quote: “Change is the only constant in life.”

How true and a timely reminder this week for me following up with sales prospects!

(This blog post is geared towards companies who sell B2C or sell multiple products or services at a low to middle price point in the B2B space.)

My daughter, who is in 1st grade, joined Brownies this year and started selling Girl Scout Cookies for her troop.

We had a late start on sales so I gave her some suggestions on whom to call.

I texted several friends of mine in advance and asked them if it was okay if she called them and that they were fully free to say no and tell her no as well if they weren’t interested in purchasing cookies.

Several friends gave the go ahead for my daughter to call them. I want my daughter to learn how to communicate with adults, especially by phone, which I think is crucial. I also wanted her to experience rejection at a young age. Getting told “No” is okay and better to learn rejection now, than for the first time at 18 years old. Finally, I wanted her to get good at asking people for orders and be direct, rather than prance around the issue.

So my daughter made sales calls while I sat there and listened and critiqued her. She ended up selling 44 boxes or so in less than 2 hours.

One thing I did NOT coach her on was this: After she wrote down the order, she asked on her own as she was getting to hang up: “Do you want anything else?”

I was one proud Dad! I didn’t teach or coach her on this phrase at all. I don’t think my daughter realized she was upselling.

If you sell multiple products or services, this is a perfect question to ask, assuming you’ve built trust and credibility. Plus, it’s better than asking, “Hey, do you want fries with that?”

“Do you want anything else?” is a great ending question for salespeople to ask once they receive an initial order. Happy selling folks! 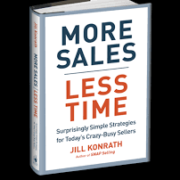 I hope that your 2017 started off in the right direction.

I’m an avid reader. I have roughly 156 books on my Barnes and Noble Nook and 27 books on my Amazon Kindle App.

If you were to visit your family doctor and found out later that your health care provider wasn’t keeping up on the latest news and research and hadn’t cracked a book in 2 years, would you be slightly disturbed?

Of course you would!

It’s no different than us sales professionals or small business owners. I’m now stepping off my soapbox.

One common theme I hear from other companies is a lack of sales. How do I get more sales?

The other is that companies don’t have a system in place on how to prospect effectively to identify and qualify potential buyers.

Well, I have 2 book recommendations for you. (Don’t you worry, I receive no commission if you purchase either book.)

Both authors are very easy to understand give relatable illustrations rather than just pie in the sky.

Take time to read this year and keep your sales skills sharp!