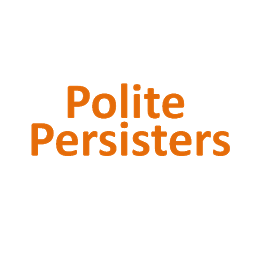 Here’s a great post from insideview.com, a great resource for sales folks!

In sales, money is made when a salesperson goes beyond the initial cold call. In fact, about 80 percent of all sales are made after five to 12 contacts between the sales person and prospect. The sales person, when pinpointing a potential sale, must dig in. The rep must engage the prospect in a variety of ways, whether it’s through social media or customer referrals, and through several contacts and interactions.

They have to go beyond the age-old art (or archaic practice, depending on who you ask) of the ever-waning cold call. Because sales people have to be constantly chasing a prospect for a sale, they leave themselves room for error. They might get cranky after a prospect won’t bite initially, or they might chase a prospect not worth chasing. Worse, a sales rep might drop a prospect who would’ve bought if the sales rep were more persistent.

Essentially, sales people have to pinpoint a prospect worth pursuing and then go after the prospect persistently and aggressively, but politely. The line between being politely persistent and a nuisance can be thin, especially given the amount of time that must be spent with a prospect before a sale is made, but understanding how to be politely persistent is vital in sales.

Be Kind and Understanding

The first key to being a politely persistent sales person is to just be kind. This tip might elicit a “duh”, but it is essential to remember, especially since sales reps can make 30 to 50 calls a day. Even if a sales person has lost track of the number of calls he or she has made in the day, the prospect on the other end of the line shouldn’t notice. In sales, a rep never knows when the prospect might be interested in agreeing to a deal, so that potential sale should never be damned because a rep has grown tired of the monotony of his or her job.

The sales person must stick to the selling points with a prospect, but also be open to going off script to answer any concerns and questions. Be patient with a prospect. Be personable. Listen, and be OK with a prospect not necessarily having the time or patience to hear your pitch when you want to give it. Tomorrow is another day.

A B2B salesrep should also be understanding and considerate of a prospect’s time. Customers are busy people, too. If they are busy and don’t have time for a pitch, call them back another time, but quickly. You don’t want a prospect forgetting who you are because you took two weeks between the initial and second contact. After the first pitch is made, consider following up the phone call that day with an email or social media message letting them know you appreciated their time and look forward to speaking with them again about how your product could help their company. Keep it brief. Then, follow through on your promise to contact them again.

After the first few contacts are made, a sales rep should have a plan of attack for closing the deal. First and foremost, a sales rep must be prepared. When making the follow-up contact to a prospect, know the prospect’s company from top to bottom. Afterall, you shouldn’t have made the call to the prospect unless you know their company could benefit from your product. The more prepared a sales person is, the better he or she can lead the conversation with a prospect. Let the prospect know you’ve done your homework, so the prospect is more inclined to speak with you and listen.

Sales people should also mix it up in the process of a sale. Don’t limit yourself to phone calls and emails. Use customer referrals. Use personal notes. Don’t be afraid to use social customer relationship management (CRM) applications. In the modern world, sales reps are using CRM apps more and more. There is no reason why sales reps shouldn’t use the apps when chasing down a sale, too. If you’ve made initial contact with a prospect, look into continuing the conversation on social media sites, such as Twitter or Facebook. This lets the prospect know you’re open to a variety of communicative channels, in touch with the 21st Century and willing to be engaged. A social CRM app also allows sales reps to better keep track of a prospect’s social media activity, which will help the sales reps to have an easier time keeping the sale moving forward.

Other sales apps can also help a sales team be politely persistent with their prospects simply because they will be more organized. A sales office should streamline its client list into an easy to access database, where its B2B sales people can store their leads and keep them organized. The better you can keep track of the status of a sale, the more likely you are to pull it off.

If you’ve reached the midway point of a sale and momentum is stalled, get a little creative. Send a personal card to the prospect’s office. Buy the office lunch. Do whatever is needed to get the first meeting without barging through the door and demanding it. And when the meeting happens, be prepared. If you’ve been politely persistent enough, then you should head into your first face-to-face meeting with the prospect ready to close the deal, instead of presenting it.

For a sale to be successful, a sales rep must be politely persistent when chasing down a sale, as long as the sale is worth chasing. Don’t waste time on sales you know won’t work. Don’t limit yourself to email and phone calls. Instead, have a thought-out plan of attack for a sale that involves a dogged-persistency mixed with a personable and creative touch.

Trade Shows and Networking Events: Are they worth it?

What Happens In Vegas Doesn’t Stay In Vegas!
Scroll to top