Blog - Latest News
You are here: Home1 / Cold Calls2 / How Many Contact Attempts Before You Give Up? 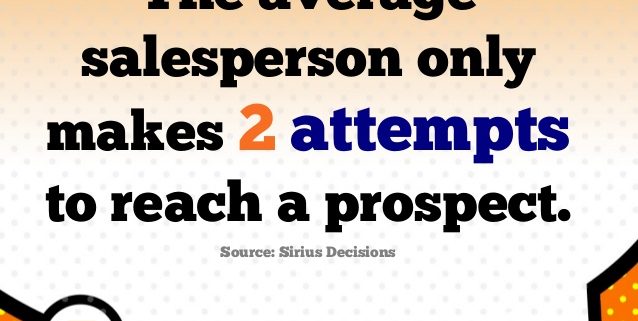 According to Jill Konrath, founder of SellingtoBigCompanies.com, in today’s business environment, you should expect to contact corporate decision makers at least eight to 10 times. If you’re trying to reach C-level executives, expect to make 12 to 14 contacts before you give up. (Source: http://www.success.com/articles/570-selling-to-big-companies)

According to insidesales.com, most sales reps only make 1.7 call attempts to reach a new prospect. (Source: http://www.insidesales.com/insider/dialer/4-sales-tips-for-making-contact-and-avoiding-prospect-badgering/)

See the disconnect? And we wonder why we aren’t bringing in new clients and accounts.

JUST BY MAKING AT LEAST 2 PLUS ATTEMPTS TO REACH A PROSPECT, YOU’RE ABOVE AVERAGE AND MAKING MORE EFFORT THAN MOST SALES REPS OUT THERE!

1. If a prospect responds to your message or reaches out to you, contact him or her as soon as possible and make as many attempts to reach them without being a pest. There’s a fine line between being a pest and being persistent. Call that person several times that day but don’t leave a voicemail until the end of the day. Then reach out to them by email and phone every other day until you feel it’s best to move on. I’ve had prospects reach out to me and leave me an email or voicemail. I go to return their call within 10 minutes and they’ve disappeared.

2. If you’re reaching out to a prospect who doesn’t know you from Adam, here’s what we do at Connect 5000 to secure a sales meeting or appointment.

Week 1: Send an email and follow up with a phone call and leave a message. Touches = 2

Week 2: No sooner than at least 5 business days later, repeat the process with a slight variation of the email and phone call.

(If you reached out to them on a Monday, the soonest I’d contact them again would be the following Monday.

Week 3: Send an email or a sales letter by postal mail and leave a message. Touches = 2

So that’s 8 touches in 4 weeks. If they haven’t responded, either move on or touch them once a month.

Unless you’re selling something to the Fortune 100 and only have 100 limited chances, put them in your CRM and move on.

Here’s a link on other creative ideas to get in front of prospects:

Some are corny, some are cheesy, but it never hurts to try. Stand out from the crowd and be different.

A Sales VP told me how a sales rep sent her beef jerky. He never made the sale but will always be memorable in her mind.

I’m Ray Ruecker and we at Connect 5000 specialize in connecting executive decision makers to technology and software companies with high average sales by setting sales appointments for your target audience.

Client Testimonial Versus Self Promoting

Sales Blunder I Made: Naming My Competition!
Scroll to top